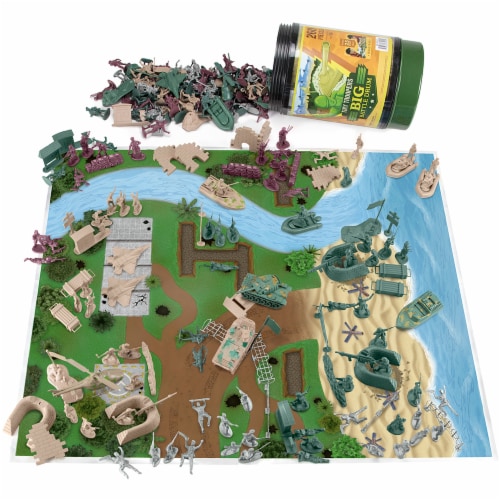 Wage a full-size war with pint-size forces! This Tiny Troopers Big Battle Drum from Imagination Generation includes everything you need for an all-out free-for-all. There's tanks, jets, boats and helicopters. There's fortifications like crumbling walls, sandbags, checkpoints and barbed wire. There's even a 2.5" foot battlefield playmat. And, of course, there's the forces. Maneuver 200 army men in four colors, green, khaki, silver and maroon, across the battlefield. Forge and break alliances. Pilot and crash vehicles. Duck into trenches and foxholes. Storm the beach, or stealthily glide up the river and guide your forces to victory! And when the dust settles, pack it all up in the hefty, sturdy battle drum. Over and out!

Why You'll Love It:

A lot of other sets may claim to be the ultimate military playset, but this set has it all. Not just a whopping 200 army men in four unique armies. Not just a full set of 16 land, air, and water vehicles. Not just a smattering of 44 fortifications and structures like barbed wire, sandbags, walls and checkpoints. On top of all that, we've included a huge 30" x 25" battlefield playmat to stage your grand battles, and a tough, hardy battle drum that neatly stores everything during times of peace. We've even included a Trooper Tactics educational insert with juicy tidbits about tanks, jets, hedgehogs, and foxholes!