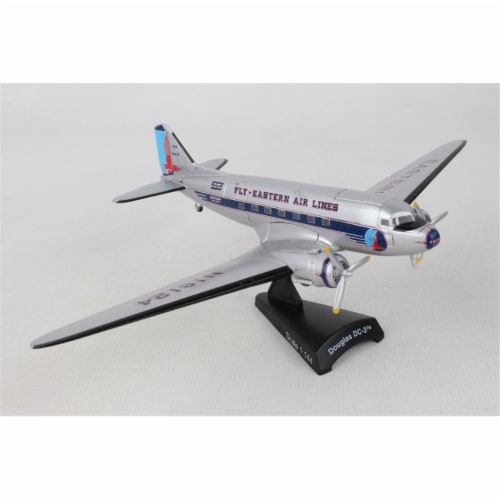 This Die cast metal airplane model comes in 1 144 scale with plastic stand The Douglas DC 3 is a fixed wing propeller driven aircraft widely used by the airline industry and the military during World War II With a cruising speed of 207 mph and a range of 1500 miles it revolutionized commercial air transport in the 1930 s It was fast versatile reliable easy to maintain and had good range qualities that are still evident with over 400 aircraft in operation to this day Eastern Airlines was a major domestic American airline from 1026 to 1991 headed by WWI Ace Capt Eddie Rickenbacker in its inaugural days They flew 76 DC 3 s from 1935 to 1953 as part of their Great Silver Fleet Aircraft N18124 was delivered in 1937 and was retired by the airline in 1953 It is currently on display at National Air and Space Museum in Washington DC Specifications . Length 5 1 2 . Wingspan Size 7 3 4 . Material Metal Plastic. Scale 1 144