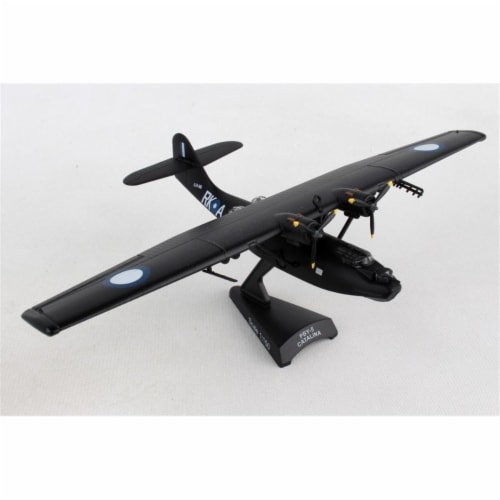 This Die cast metal airplane model comes in 1 150 scale with plastic stand Catalina A24 88 was delivered to the RAAF in March 1944 as a PBY 5A and served with 42 Squadron as RK A from August 1944 through to July 1945 in the South East Pacific operations as a Black Cat on sea mining missions A24 88 most famous mission was to take part in the longest Black Cat mining mission of the War to mine Manila Harbour in December 1944 to bottle up the Japanese fleet ahead of the landings in the Philippines by General MacArthur A24 88 was transferred to 11 Squadron on August 1st 1945 and remained with that squadron to the end of the war On January 10th 1946 A24 88 was allocated to 1 Flying Boat Repair Depot at Lake Boga Victoria for storage and disposal Specifications . Length 5 1 8 . Wingspan Size 8 1 4 . Material Metal Plastic. Scale 1 150