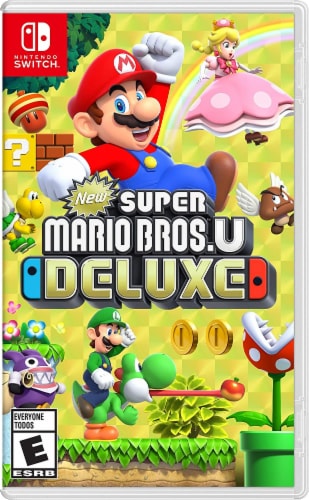 NEW SUPER MARIO BROS U DELUXEBrand: Nintendo of AmericaJoin Mario, Luigi, and pals for single-player or multiplayer fun anytime, anywhere! Take on two family-friendly, side-scrolling adventures with up to three friends* as you try to save the Mushroom Kingdom. Includes the New Super Mario Bros. U game and harder, faster New Super Luigi U gameboth of which include Nabbit and Toadette as playable characters! Two games in one, for double the fun! Features:Two games in one, for double the fun! Simple, straightforward controls, new playable characters Optimized for younger and less-experienced playersWealth of bonus content. All a player needs is one Joy-Con™ controller, so two people can team up right out of the box.Tackle 164 platforming courses in the two main game modesExtra replayability with three additional game modes.Play as a Mii™ character: Challenges, Boost Rush, and Coin Battle!