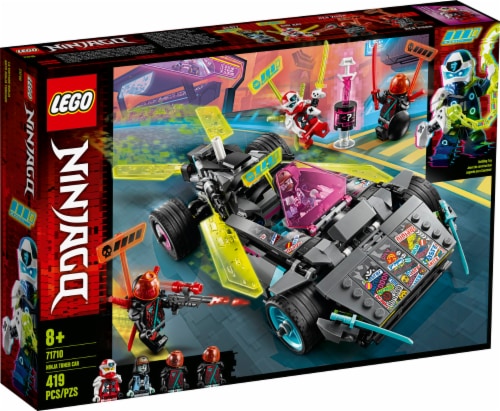 This LEGO® NINJAGO® Ninja Tuner Car with 4 minifigures building set will be loved by fans of ninja cars, who also have the thrill of transforming it into a flying toy. Kids can role-play being their hero NINJAGO Digi Kai and learn about the ninjas' ethos of believing in yourself and helping others. The best toy cars for kids: With 4 buildable figures of NINJAGO Digi Kai, Scott and two evil Red Visors, youngsters can immerse themselves in the video game world of Prime Empire and recreate battles for a Key-Tana. This combined ninja car and flying toy will really fire up their imagination and inspire independent play, or endless fun with friends. The perfect LEGO gift: LEGO NINJAGO building sets allow kids to enter a mystical world of adventure where they can team up with their ninja heroes to take on the forces of evil. NINJAGO fans will be captivated as they role-play with these stunning action toys, which include speeders, NINJAGO® cars, dragons, temples and buildable figures. Awesome LEGO® NINJAGO® Ninja Tuner Car, which transforms into a flying car toy. This makes the ideal birthday gift for kids who love building NINJAGO cars and role-playing their own stories with their mini-ninja heroes.