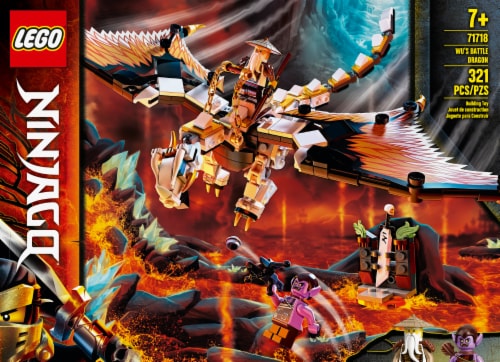 This LEGO® NINJAGO® Wu’s Battle Dragon (71718) building set for kids with 2 minifigures will be adored by fans of ninja toys, who can use it to stage their own fantasy stories from the NINJAGO TV series. The awesome posable dragon can move its wings, tail, feet and head.

With 2 buildable figures of Hero Wu and Gleck, ninja fans can immerse themselves in the mysterious Dungeons of Shintaro and play out battles between themselves for the Ivory Blade of Deliverance. Wu can ride his flying dragon, which will enchant youngsters’ creative minds.

LEGO NINJAGO building toys for kids let them learn about the honorable values of ninjas as they venture into a world of mystery where they can role-play their heroes battling powerful dark forces. NINJAGO fans will be gripped for hours by these fun toys, which include dragons, cars and mechs in the different playsets.